This Week’s Story: It Was The 80s – Even Lingerie Had Shoulder Pads

By Deanna Posted on October 21, 2020 Posted in Articles, For Sale, This Week's Story

This Week’s Story is prompted by a vintage piece of lingerie. You can listen to the audio podcast here.

This particular lingerie piece, in a powder blue satin, is more slinky sleepshirt than naughty negligee. With its built-in shoulder pads and double-breasted suit jacket front, this nightie looks more like an oversized power suit jacket than something you’d find in the ladies’ intimates department. It’s oh-so 80s. 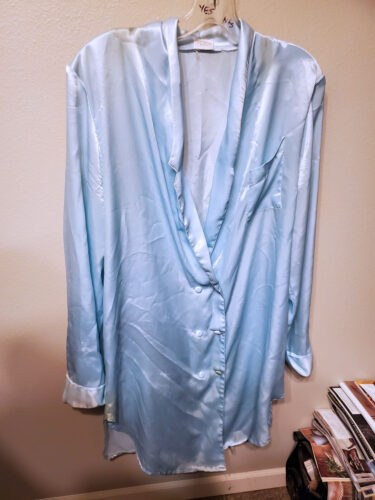 But the garment’s roots are in the 1940s. Designer Elsa Schiaparelli may have lit the shoulder pad fuse in 1931, but it wasn’t until World War II began that the big bang of shoulder pads in women’s fashions really exploded.

Women’s fashions became steadily militarized, heavy in masculine styles with shoulder pads becoming increasingly bulkier and positioned at the top of the shoulder to create a solid, strong look.

Soon the style was ubiquitous in female fashions, found in all garments except for lingerie.

So leave it to the 1980s, decade of excess, to put shoulder pads in the lingerie.

Fashions of the 80s rigorously borrowed from many previous decades – exaggerating things as it went.

From the 40s – big shoulders and double-breasted suits.

From the 1950s, the 80s took rolled jeans and rocker leather. Those soft 50s pastel angora sweaters were back – now paired primarily with black for higher contrast. And the classic 1950s ponytail become the exaggerated side ponytail.

Of course, there was a great backlash to all this big, bold, exaggerated 80s fashion too.

Brands such as Laura Ashley & Jessica McClintock’s Gunne Sax surged forward with their fond looks backward towards a softer, feminine, romance associated with prairie and Victorian-styled designs. A time when women were women and men were men. (Of course, leaving out the facts that back in those good old days manly men and womanly women had to use outhouses and chamber pots, as we often do when romancing the past.)

This gender power struggle dynamic displayed in culture as fashion can be seen clearly in the 1980s television show Dynasty. The show’s costume designer, Nolan Miller, dressed his stars, Linda Evans and Joan Collins, in more than just the glamorous gowns of the wealthy. Their wardrobes were built on establishing and displaying the female leads’ authority and power. Big shoulder pads were needed for such big ambitions!

But even as those huge-shouldered power suits represented the power in the new working woman, it was also necessary to show that underneath her “bitch in the boardroom” persona, she was “all woman” underneath. Enter lingerie.

All things silky and lacy were paramount to a woman’s 80s wardrobe. Whether it was underwear as outerwear, a la Madonna, or it was a silky soft teddy beneath that tough power suit, lingerie was an 80s necessity. In the case of this vintage 80s piece, one would balance the “I mean business!” double-breasted, shoulder-padded night-suit by wearing the “Monkey business, baby!” of an all lace bodysuit (typically with stockings) beneath it.

This is the intimates fashion equivalent of Enjolie’s “I can bring home the bacon, fry it up in a pan. And never, ever let you forget you’re a man.” 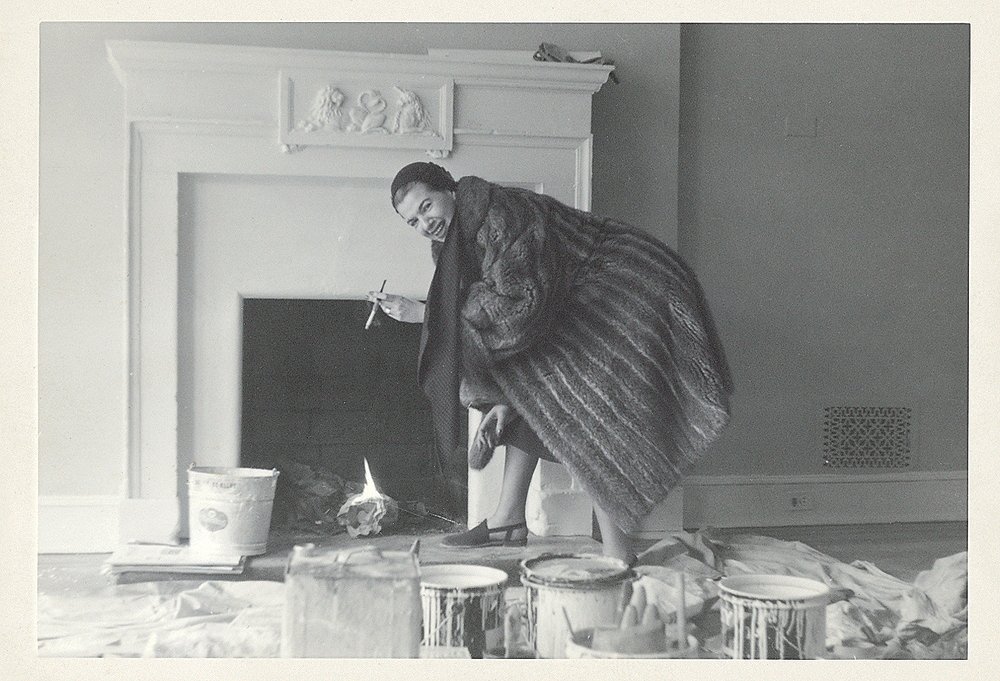 By Deanna Posted on February 16, 2020 Posted in An Antiquers Life, Why We Sell

I fell in love with Iris Apfel when I spotted her documentary on Netflix – I sent everyone to watch it. Whether you adore vintage costume jewelry, fashion & textiles, whimsical decor, or spunky old broads, you’ll love Iris. Most of the world now does. She’s become an icon. And most of what she exudes is knowledge that every self-styled vintage lover already knows. Following her is really following yourself. Rock on, Iris! Rock on all of us!

PS Iris is more than an icon – she’s put in the years of work too.

Iris was a decorator and textile designer for the better part of her career. In 1950 she and her husband, Carl, opened Old World Weavers, a textile firm they ran until 1992, servicing everyone from Emily Post to Dorothy Draper. Iris also was responsible for many White House restorations, including those of the Truman, Kennedy, and Clinton administrations. 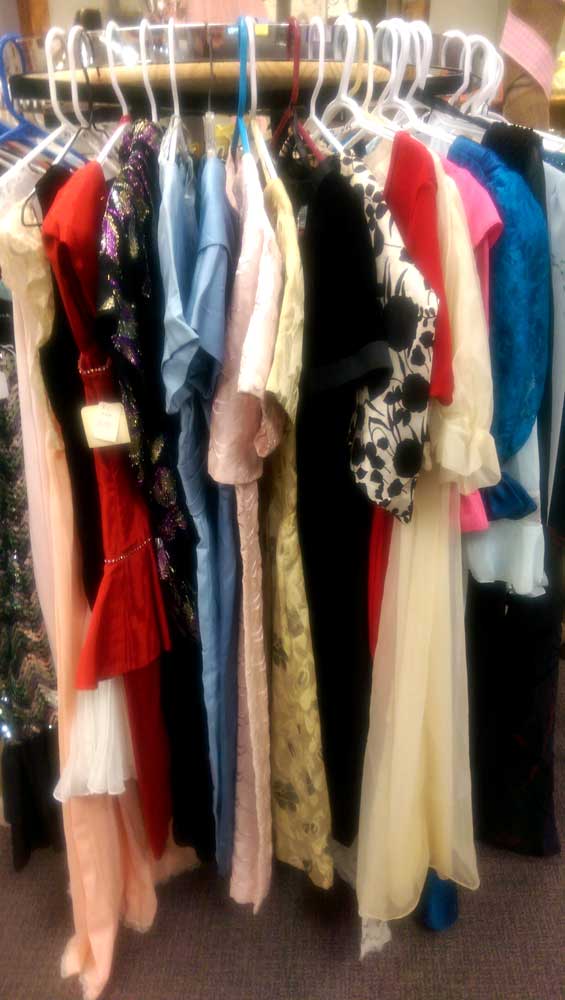 By Deanna Posted on July 9, 2016 Posted in An Antiquers Life, For Sale, Where We'll Be

The Fargo Antiques & Repurposed Market (F.A.R.M.) has expanded, opening a new, second location in the Moorhead Center Mall — and we’ve expanded too, taking another two booths there. You can see a bit of our space in this photo taken for the article about the new location in the July 7, 2016 issue of the FM-Extra. 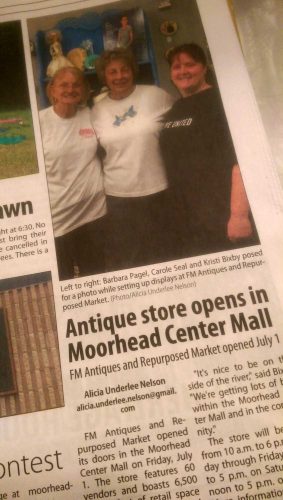 The two booths are together, but one side (currently) focuses on Mid-Century Modern furnishings and decor (that link is just a sneak peek; will share more photos later, I promise!) and the other booth is filled with vintage clothing. Yes, Fargo-Moorhead has another shopping venue for authentic vintage clothing! 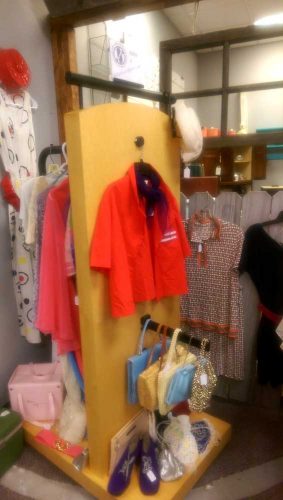 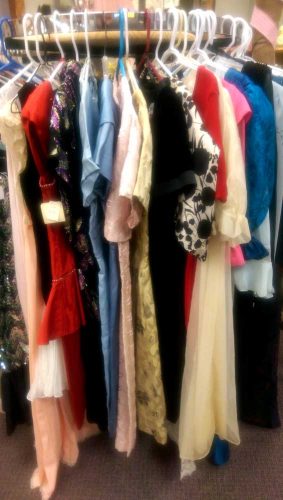 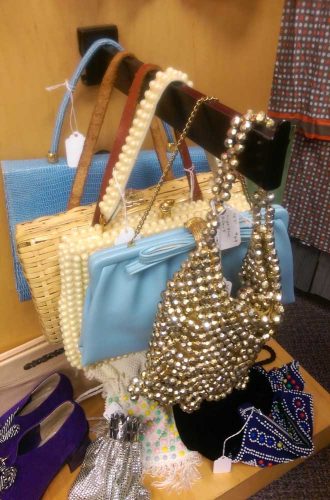 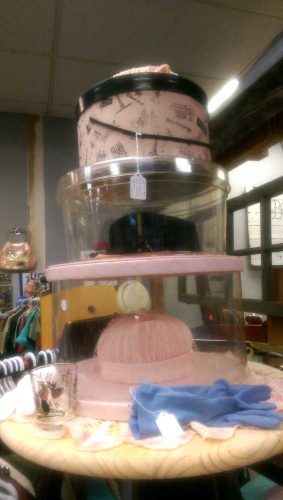 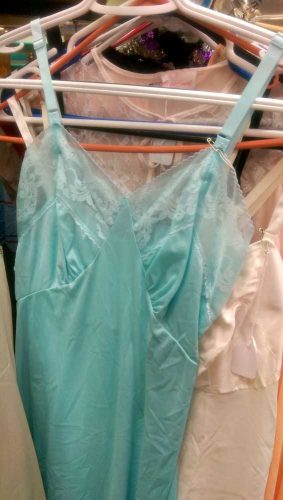 And we are proud to offer a number of new old stock (NOS) fashions from the 1980s and 90s which have their original sales tags! These dresses and jumpsuits came from the Stamas Boutique in Hales Corners, Wisconsin, where the wives of Milwaukee Brewers and other well-heeled society shopped. (I know; I used to work there back in the 1980s — I probably handled some of these very same garments!) 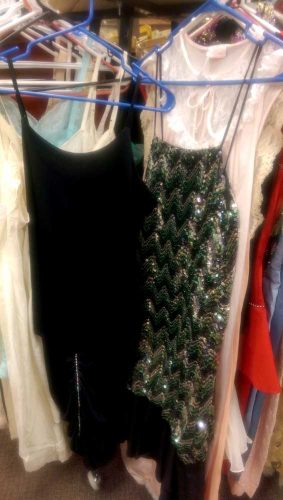 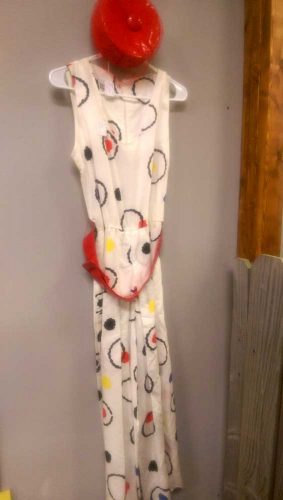 In addition to our vintage clothing, several other dealers at the new FM Antiques & Repurposed Market store also have vintage fashions for sale. So why not come on down to the Moorhead Center Mall and check it out? In fact, hubby & I will be working there today (Saturday, July 9th) so we can help you out! 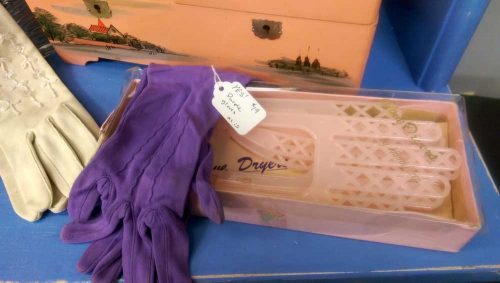 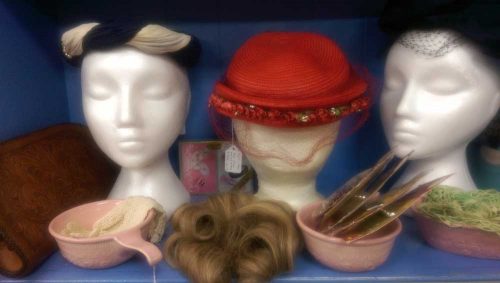 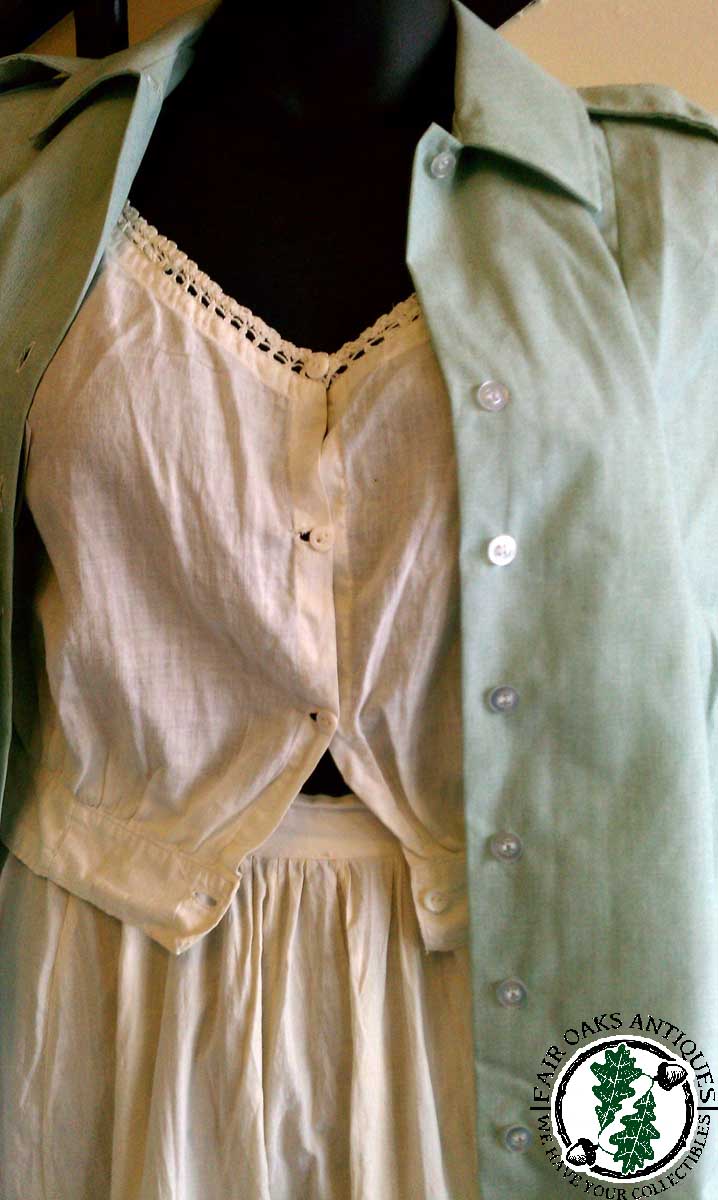 By Deanna Posted on June 5, 2014 Posted in Articles, For Sale

Few things say “prairie fashion” like the ruffled petticoats made of cotton muslin. They are especially romantic when trimmed with eyelet and lace — and paired with other Victorian underthings, like corset covers and camisoles. But when I placed these pieces on the rack at the shop, next to our selection of vintage military fatigues & camouflage pants, I had an idea… 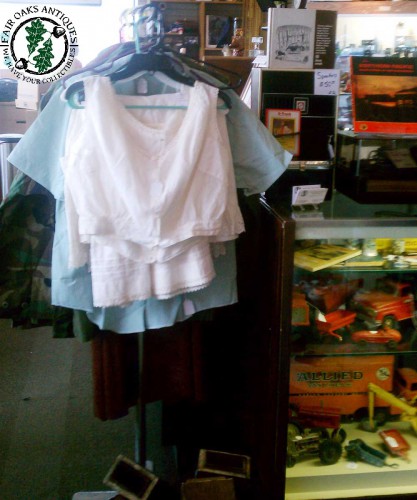 Really, what can be more “prairie” than combining the femininity of pretty-yet-practical Victorian underthings with military fatigues & camouflage? 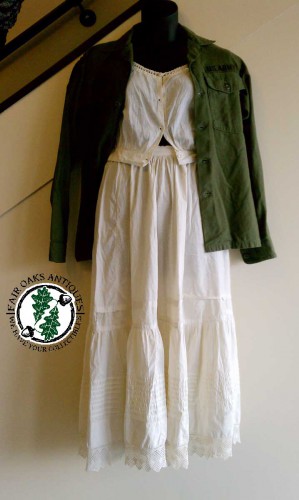 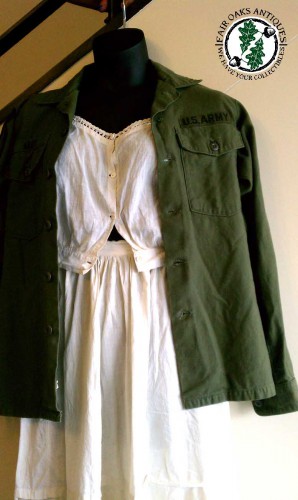 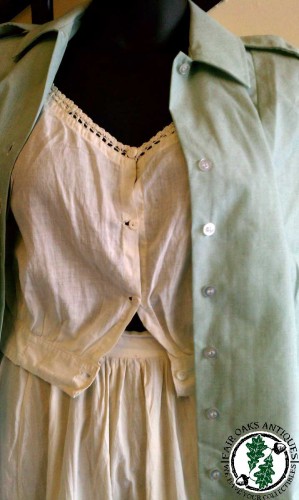 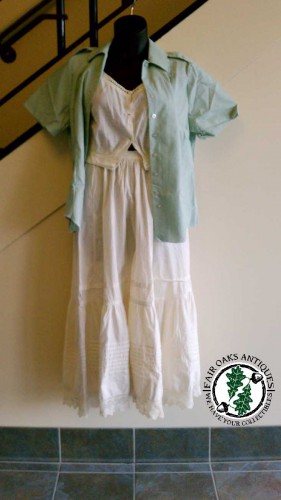 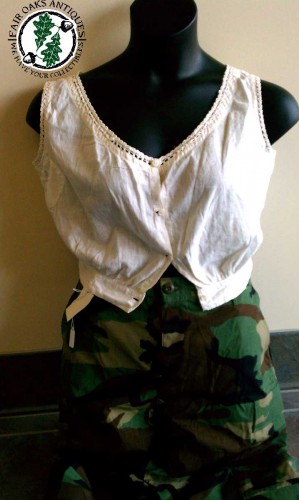 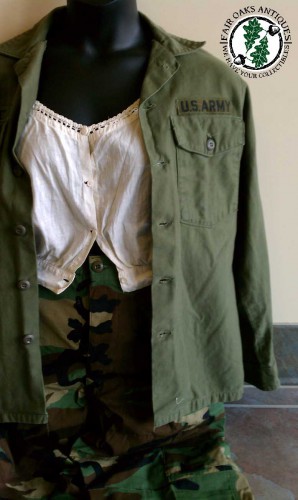 These fashion looks combine the history of prairie sod-busting with the patriotism of supporting our troops — including those on North Dakota’s military bases. Plus it’s pretty cool looking, right?

We also have a very cool vintage suede buckskin vest that looks fabulous over the old Victorian cotton shift dress or nightshirt. 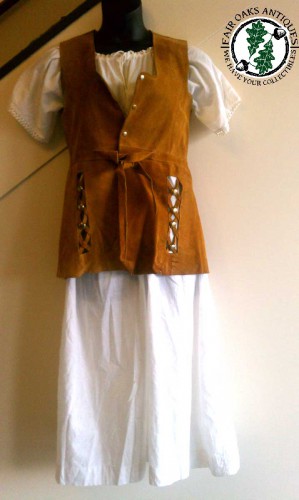 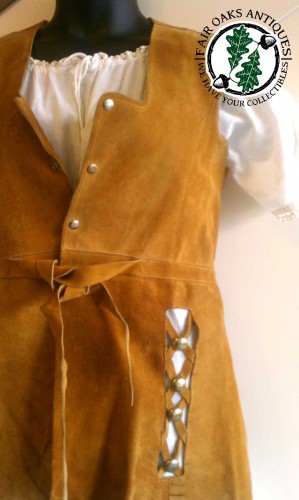 And did you know that wearing vintage is good for the environment too? It is!

That shop has closed; check our Etsy shop!

Dealer Notes: These old muslin pieces have pure Victorian styling, but likely date from the 1910s or 1920s. As authentic vintage pieces, they have some repairs and other signs of age — but that only serves to make them more charming and truly one of a kind vintage pieces. Some of the military clothing is actually new old stock (NOS) with their original sales tags. That includes the fine green and white striped shirt with shoulder epaulets. 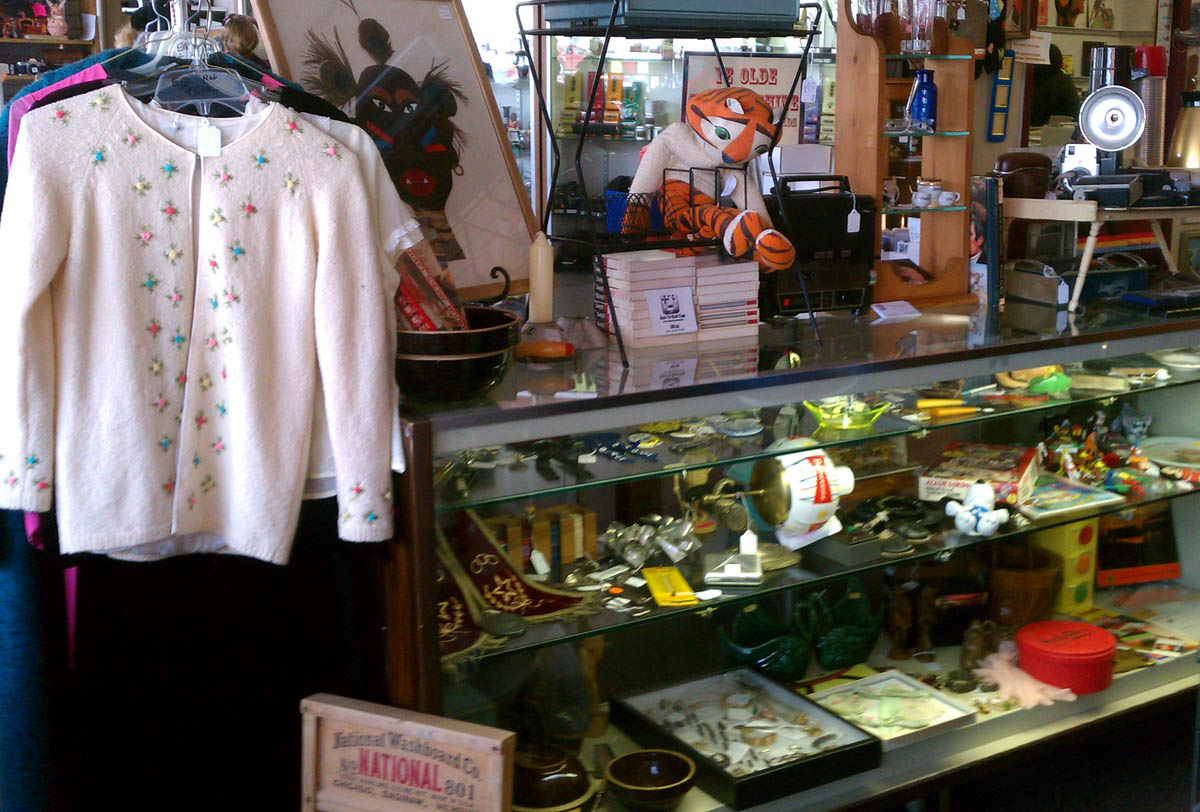 More At Antiques On Broadway

We are continually adding new items to all our locations. Here’s a photo of our updated case and vintage fashion rack at Antiques On Broadway in Fargo. (What you can’t see in this photo is the amazing vintage Pabst vest we’re selling!) 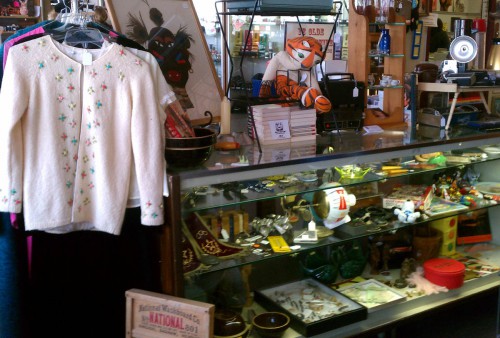