Deanna Posted on October 7, 2020 Posted in Articles, This Week's Story No Comments

Hi, I’m Deanna Dahlsad of Fair Oaks Antiques. This Week’s Story is a little bit different… It’s still about an object, just not one for sale. And it’s also a story for the month, as you’ll see. A reminder: You can listen to This Week’s Story as a podcast!

Due to it being Breast Cancer Awareness Month, October is now synonymous with pink. Since 2009, the NFL has pushed the man-enough-to-wear-pink message to encourage men to care about women’s breasts. As if the NFL, its members & fans, need encouragement in that area. It really is an odd ogling message for a league beleaguered with misogyny and the coverup of player health issues. Especially as the movement aimed to reach out and pander to more women. It would have been better for the NFL to punish abusive players and address player health issues. But hoping on the “Pinkwashing” train of commodifying and profiting off of breast cancer was too-too easy – like fraud levels of easy.

Now most of us know how we were exploited in the name of pink merchandise for cancer awareness and now avoid the scams of such a shadow industry. And perhaps this is why the NFL has quietly shifted away from breast cancer awareness to a broader cancer-awareness with its more colorful “Crucial Catch” program.

But the decade-long marriage between the masculine nature of the NFL and the girly pink merch is an interesting one. In 2000, who would have thought that such macho men would be wearing pink? Well, those of us alive in the 80s recall men in pastel pink polo shirts – and they weren’t afraid to tell you they were secure enough in their masculinity to wear pink either. And those of us even older remember men wearing pink too.

Vintage clothing catalogs are filled with examples, such as bright & cheery pink & black cowboy playsuits. Yup, pink shirts and pants with black hats & even holsters to hold silver pistols. For boys too.

In fact, we have a long and documented history of pink being the preferred color for boys. Not only in fashion catalogs and department store ads, but in trade publications and national news magazines, such as Time. Going back as far as the early 1800s, pink was considered the stronger more resolute color, therefore most suitable for boys, while blue, being more delicate and dainty, was best for girls. The Smithsonian has a great article about this gender color phenomenon, if you are interested.

I was reminded of all of this pink business whilst we were restoring our old house, Esmerelda. There in the basement, surrounded by walls painted in that battleship basement grey (which must have been the law at some point because every basement I’ve seen has had at least one coat of that color), our 100+-year-old house sports a brick chimney – and it’s covered in pink paint.

It would seem an odd color choice – unless you knew the history of the color pink. For it is important to keep your chimney strong and clear – it literally keeps your house in the pink. 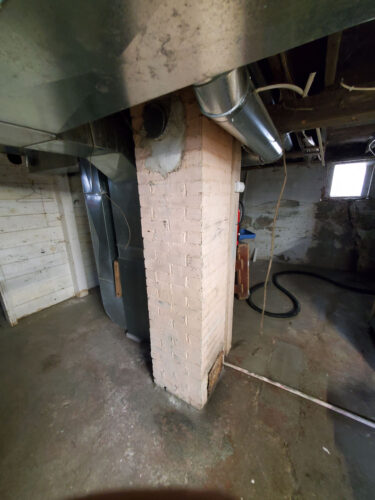 0 Comments on “This Week’s Story: Man Enough For Pink”